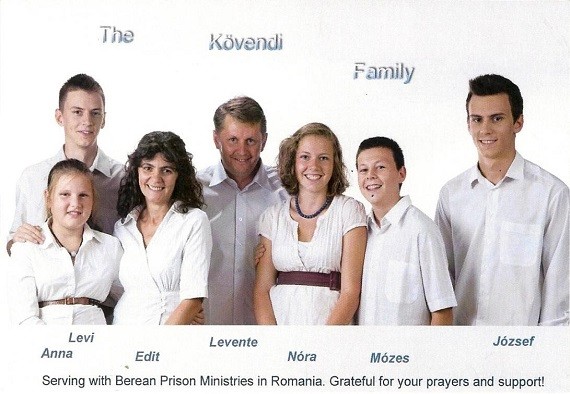 In the U.S. we are holding regular church services at the following sites:

In Russia we have 10 volunteers holding services in 6 prisons in the Russian Republic of Karelia.

In Romania we have 50 volunteers holding services in 23 of their 42 prisons.

Following are some pictures and stories of that work:

Above is a picture of Levente Kovendi and his family. Levente leads our ministry in Romania. He locates the volunteers to serve in the prisons, works with the prison officials to start ministering in a particular prison, attends and conducts services with the new volunteers to help them get started, regularly meets with current volunteers to encourage them in the work and to help them as needed, and is responsible for holding services in a number of prisons himself.

Fedi Davidovics lives near Peoria and leads the Romanian prison ministry for Berean. Fedi was raised in Romania and escaped when the country was under communism. He and his family lived and ministered in Romania in 2003. Berean has sent a delegation to Romania every year since that time.

Shortly after the delegation started traveling to Romania, they met with the General Director of the Romanian penal system who gave them permission to place volunteers in all 43 of their prisons. Currently Berean has approximately 50 volunteers serving in 23 of their prison. Additional prisons will be added as additional Christian volunteers are located.

Berean helped to finance the construction of two church buildings for gypsy people in Romania. The first church was at Miercurea Ciuc. A young gypsy man became a Christian while attending services held by volunteers in the prison where he was an inmate. When released he returned to his gypsy village and began holding a Bible study. The gypsy leader and a large number of people became believers and the church worships in a building Berean helped them purchase and remodel.

The second gypsy church is located in Gheorgheni, Romania. In Gheorgheni, 400 gypsies lived on the outskirts of the city in a community with no sewer, no electricity, and one water facet to provide for the water needs of the entire community. They had a church building that was not large enough to allow the children to attend services with the parents. They had started construction of a church building and Berean raised the funds needed to complete the construction and to construct a hygiene house where they can shower twice a week and launder their clothing.

Attached are pictures of the church in Gheorgheni and short video we prepared at the time we were collecting funds for this project.